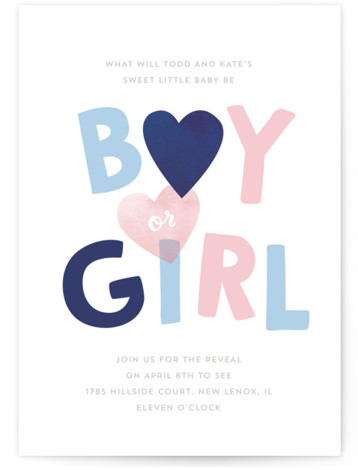 The gender reveal party: a popular take on the traditional baby shower, but with a little extra surprise at the end. If you’re planning the party, you’re probably close to the parents-to-be (or maybe you ARE the parents-to-be), so of course you’ll want everything to be perfect.

First things first: make sure you know with absolute certainty who’s supposed to be in on the secret and who wants to be surprised. Seems like a simple thing, but you never know! The sex of a new baby is big news in many families, and let’s face it, we’ve all got that one family member who can’t keep a secret. When in doubt, err on the side of caution!

You’ll also want to double and triple check that the parents-to-be are on board with the concept of a gender reveal party in the first place. Attitudes about binary gender are changing fast, especially among millennials (who make up the majority of people currently having kiddos right now). What might sound like a very exciting party idea to a prospective grandmother or grandfather may not actually align with the mom-to-be’s beliefs. Or even if it does, there may be guests in attendance whose views the prospective parents will want to take into consideration. There’s no right or wrong way to do it - just make sure that everyone is aware of and comfortable with the plan.

Okay, whew - now that you know everybody’s on board, it’s time to party plan! There are a ton of unique and cute ways to reveal the gender of your baby, and you’ll find no shortage of decorations out there, from centerpieces to banners to specialty gender reveal mocktail recipes. We’ve picked out just a few of the most classic strategies to help get you inspired.

If you’re baking the cake yourself, you know what to do. Add some pink or blue food coloring to the batter, then frost heavily with a neutral color. You can keep it simple and delicious, or go for something more ambitious. There are a lot of truly adorable gender reveal cake ideas out there on the internet - maybe try one with colored batter plus a filling made from edible glitter or sprinkles to add a little extra excitement when mom cuts the cake.

If you’re ordering from a bakery, bring along a copy of the gender info plus a few ideas for a design. Your baker may have lots of experience designing gender reveal cakes, or they may not, so you’ll want to be prepared with a few ideas. If your gender reveal party has a theme (always a good idea), you can bring those notes to your baker and have them create something that matches. Or you can stick to a plain and neutral cake frosted with a cheeky message of your choice. We also love the idea of a simple cake covered in fondant question marks (just make sure it doesn’t look too Joker-esque).

More of a cupcake person? No problem - gender reveal cupcakes are super-cute too. Just make sure nobody sneaks one and ruins the surprise!

Who doesn’t love a piñata? A lot of adults attending a baby gender reveal party won’t have whacked a piñata in years, but we’re willing to bet they never stopped loving that satisfying crack that means candy’s about to cascade all over the party.

One of the best things about this gender reveal method is that it’s interactive. Sure, you could let the mom or dad to be do the whole thing, if you really wanted to. But the fun of a piñata, at any party, is not knowing who’ll be the one to strike to final blow. It’s a great way to get every guest involved and excited.

Like the gender reveal cake, this one’s pretty simple to carry out. Just pick a fun and neutral piñata that ties into your theme (maybe not a piñata shaped like a baby, though - lots of party supply stores carry them, and they might seem like a cute idea, but only until the batting starts). Then fill it with color-coordinated candies and trinkets.

This one is as easy as it gets. It’s festive and fun - and all you have to do is buy the right color. You’ll find tons of ready-made confetti crackers at your local party supply store. Have the parents do the honors for all to see, or hand them around to all the guests and count down.

Confetti can be a bit of a pain, so if you’re partying outdoors you might want to check out a confetti bomb made with biodegradable glitter or confetti - that way it’s not a major deal if you can’t clean it all up. Of course, an eco-friendly approach is always best, but if you’re inside and can just sweep it all up it won’t matter quite so much.

Of course, there are a ton of other ways to reveal your baby’s gender. And hey, maybe you’re planning for twins? That just means double the fun. So feel free to get creative! You could make a video and screen it at the end of the party, or present the parents-to-be with a beautifully wrapped box containing the verdict. Simple or elaborate, classic or creative, it’s all good news!

How to plan a baby shower that everyone will remember. Read more.